January 01, 2019
I have taught kids stop motion animation for a good ten years now. It is a wonderful way for students to understand how video and animation work by breaking it all down to set one frame at a time. For those who dont know, a typical video camera will record and playback 30 frames per second. The idea is that is too many pictures for the eye and brain to process every second so it stops looking like a series of pictures and starts looking like one picture that is constantly moving. The point where the eye is overwhelmed and it stops looking like a series of pictures is at about 10 frames per second. I always tell my students to use 10 frames per second for planning because the math is easy (if they want a 1 minute animation, they need 600 frames) and that is a speed that will look good.
Kids inevitably end up lowering the frame rate to make their animations longer but by setting 10 as my benchmark, I tend not to have anyone give me anything less than 5 or 6 frames per second, which looks decent for elementary school. When I started, I would use point and shoot cameras to take pictures then we would load them into iMovie. Once all the pictures were imported (which once took over an hour when I had a high achieving group take 1600 pictures) kids would then have to turn off the Ken burns effect, set the frame rate and then they could finally see what they had made.

When I got iPads, things improved drastically. We use the Stop Motion app, which has a few key features. Most importantly, it provides instant feedback. Kids take pictures in the app then just hit play. I always tell kids they have to stop and watch their animations after the first 20 frames. Since many kids dont really get the process until they watch their first animation, I think it is important to let them fail quickly. When the kids watch their first 2 or 3 seconds of animation, they see what they did well and what to change before I even say anything. My second favorite thing about the Stop Motion app is the onion skinning. Another teacher I know showed it to the kids calling it "ghost mode" which made it sound way cooler so the kids actually used it and their work became a whole lot smoother. 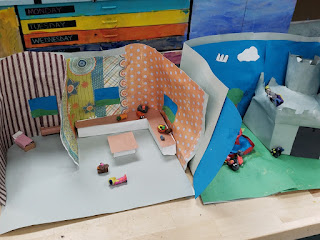 For the last few years, I have generally gotten good results by doing the project in stages. Day 1 kids focused just on clay figures. Day 2 they focused just on sets. Then I usually gave kids 3 days taking pictures and 1 day to edit. This year I tried a little experiment with my 3rd graders. I wanted to introduce animation but I only had 3 weeks before winter break. I decided to give kids two choices: they could work on a collaborative animation with peers in other classes or they could make their own individual animations. Kids were split about half and half in their choices. I'm going to focus on the experimental group because they were the most interesting. 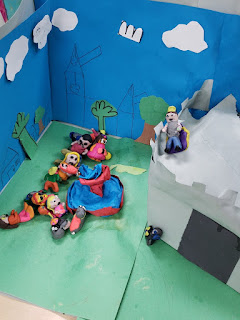 The first week, kids were wrapping up another project. Early finishers were invited to construct sets, props and characters. They made 5 or 6 paper dioramas and they made 3-5 copies of the main characters. They made multiple copies of the characters so that different groups could animate different scenes at the same time. Week 2, each group just built off the work of the previous group. I provided the kids with a storyboard and they divided up to tackle different scenes. The first day of week 3, I was out sick. I'm not sure exactly how or why, but a couple of 4th graders decided to destroy most of my 3rd grade students' clay figures. The 3rd graders were at least about 1800 frames into the animation at that point. They took it better than I did and while they lost a day of shooting, they were able to rebuild what they needed to finish the project.

Because of the lost time, I started to worry about whether I could finish before winter break. Luckily the classroom teachers were super helpful. I asked them to each send me 2 or 3 volunteers one day during my prep period. These kids acted like total pros. They took turns recording voiceovers and divided into groups to animate most of the remaining scenes we needed.  I showed the kids a rough cut and asked for someone to make a title sequence the last day before winter break. In 45 minutes, they produced a solid 300 frame animation to open the piece. By having each class build off of the work of the previous class, we accomplished more than any group i have ever taught, and they did it in less time. As an added bonus it forced kids to look critically at each others work and they reflected and revised so it forced some deeper thinking which I believe led to much higher quality work. For the first time, I actually had students going to far as to move characters mouths to make it look like they were talking. Please take time to watch this animation, like it and share it because these kids deserve a big audience. 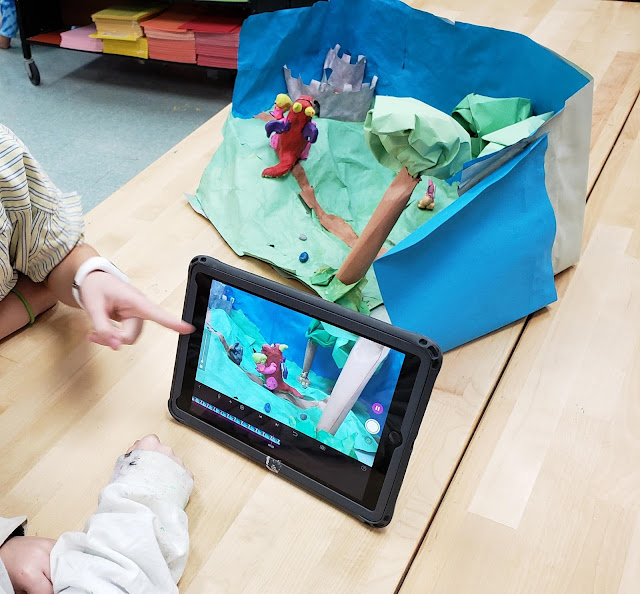 Popular posts from this blog

March 25, 2018
Welcome to my elementary art blog. I will be posting various lesson plans and resources used for teaching k-5 Art. Check back regularly as I intend to update this weekly with videos and other resources that help in my classroom and they can help in yours too.

One thing that has been transformative in my teaching is video demonstrations of key skills. I started making videos after coming to the realization that when I did a live demonstration of clay or origami, half the class could not actually see what I was doing. By recording video, I could project it larger so kids could see better, but I also found that it freed me up to focus on my students and my instruction better. I no longer had to worry about the creation of a sample project, I could simply focus on the explanation while also looking at my students to find signs of confusion, anticipate problems etc. If you have not flipped your art room, I highly recommend it.

October 31, 2019
For the first episode of the Podcast, I talked to my favorite LC Director, Tony Kresl about Georges Seurat and his masterpiece, Sunday on la Grande Jatte. Every episode features three parts: In Situ - where we discuss the art history and the context in which the piece was createdIn Gallery - where we look more closely at the piece sharing what we see, what connections we makeIn Studio - where we share our takeaways and tips for making better art Click to listen to Who ARTed - Georeges Seurat

Do I Really Wanna Know

May 21, 2019
As my school year winds down, I try to take a little time to reflect on my year. I try to do this while things are still fresh. Things are so fresh in fact, I still have another week and a half left in school. While this time of year is crazy and so many kids are checked out, i thought it might be nice to get feedback from students on all of the changes i have made this year. Of course when I think of all the work I've put into those changes, the natural question becomes "do I really want to know students opinions?" The natural answer all of us are taught to say is yes, of course we want feedback from all stakeholders and students should have a say in their education. Of course that sounds good in theory, but in practice, it can be much harder. Realistically, it is hard not to take it personally when a kid says they don't like the system you set up. I wouldn't want to gather data as a show of valuing student opinions while they feel pressure to compliment me, so …
Post a Comment
Read more